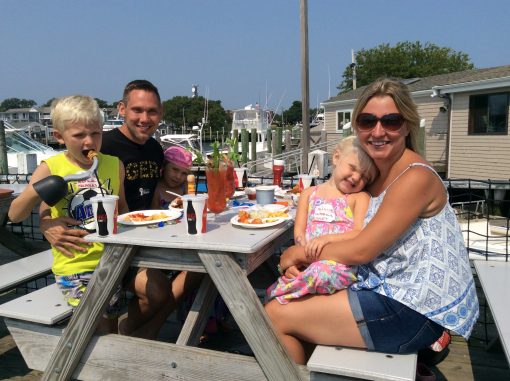 Baxter’s Wharf is a casual seafood restaurant built entirely over the water on Hyannis Harbor and has been welcoming guests since 1957. It is the only restaurant in Hyannis with a working dock where boaters can pull up and dine inside or out on their boats. The menu features a variety of the freshest seafood found on Cape Cod as well as delicious salads, juicy burgers and our specialty cocktails including “The Binnacle” – voted as Cape Cod’s favorite Bloody Mary.

There is plenty of indoor and outdoor seating with stunning views in all directions. Enjoy a menu of the freshest seafood that Cape Cod has to offer. Order your seafood favorites, enjoy creative cocktails from the bar, and watch the ferries enter and leave Hyannis Harbor. The restaurant’s rich Cape Cod history is featured throughout the decor, and be sure to stock up on all your Baxter’s gear from the gift shop before you leave.

So grab the family and come on down to Baxter’s Wharf overlooking beautiful Hyannis Harbor!

Baxter’s is one of only a handful of Hyannis waterfront restaurants and has operated as a seasonal Cape Cod seafood restaurant since 1967. The Baxter family’s connection to the property at 177 Pleasant Street stretches back nearly 50 years before that.

Benjamin D. Baxter was a local sea captain whose son, Benjamin D. Baxter Jr., purchased the property in 1919 and used it for packing fish. In the 1930s, another son, Warren, began operating a fish market out of the building that currently houses the Boathouse. After World War II, the sons split the property. Warren continued to operate the fish market, while Benjamin expanded to off-loading fishing vessels and selling fuel.

In 1957, Warren’s wife installed a Fryolator in a dock shed and began selling fish and chips.

Our Hyannis Harbor restaurant, as it is today opened July 4, 1967, and has attracted celebrities, including the Kennedy’s who were regular customers.